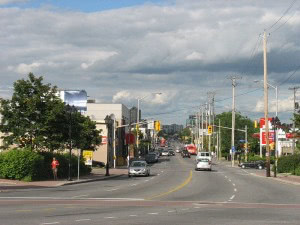 Vanier is an historically francophone neighbourhood in the Rideau-Vanier Ward in Ottawa, Canada’s east end. The neighbourhood was a separate city until being amalgamated into Ottawa in 2001. The neighbourhood is located on the east bank of the Rideau River, across from the neighbourhoods of Lowertown and Sandy Hill, and just south of Rockcliffe Park, New Edinburgh, Lindenlea, and Manor Park . To the east of Vanier are the suburbs of Gloucester. Vanier has a relatively small area with a high population density.

In 1908, the communities of Janeville, Clarkstown and Clandeboye were joined to form the village of Eastview. In 1913, Eastview was incorporated as a town. Originally it was a popular destination for civil servants who wished to live at a distance from downtown. It later saw a large influx of French Canadians and became the main francophone area in the capital.

During the Depression, Eastview held the attention of the entire nation, as it became a public forum for national debates on birth control during The Eastview Birth Control Trial, which lasted from 1936 to 1937. Significant controversy erupted when Dorothea Palmer was believed to have been distributing birth control information to the poorer, predominantly Catholic neighbourhoods. Later, in 1963 it became a city, and in 1969 was renamed after the recently deceased Governor General of Canada, Georges Vanier.

Vanier has undergone significant changes since 2007. It is one of the last relatively inexpensive Ottawa neighbourhoods with a desirable location next to downtown. The neighbourhood is becoming increasingly popular among young families thanks to the only publicly funded school in Ottawa based upon Waldorf education, Trille des Bois, and an active community association.

Like nearby Lowertown, Ottawa’s Vanier neighbourhood is home to a number of French-speaking immigrants from Africa and elsewhere. It is also the site of an urban maple syrup Maple Sugar Festival (Festival des Sucres) held in spring, and home to an outdoor Catholic shrine, the Grotte de Lourdes.