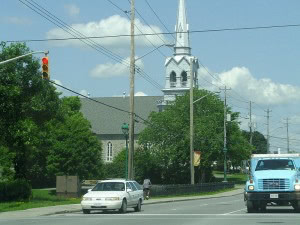 Orléans is located in the eastern part of the city along the Ottawa River, about 16 km from downtown Ottawa. Orléans had a population of 107,823 as of 2011. Prior to being amalgamated into Ottawa in 2001, the community of Orléans was spread over two municipal jurisdictions, the eastern portion being in the pre-amalgamation City of Cumberland, the western portion in the City of Gloucester.

The community is thought to have been named by its first postmaster, Théodore Besserer, after his place of birth, the Île d’Orléans near Quebec City. Orléans was an incorporated police village from 1922 to 1974 and was then known as St. Joseph d’Orléans. The community’s name inspired the name of one its main roads, Jeanne D’Arc Boulevard, which wraps its way around the community. Jeanne d’Arc (Joan of Arc) was a 15th-century martyr who led the French army to victory in Orléans, France.

Largely a rural area for a great number of years, the first major suburban subdivision constructed in the community was the Queenswood Heights development starting in the late 1960s. Orléans has continued its steady growth as a suburban community since that time; its southern and easternmost boundaries continue to grow as more houses and businesses are built. Orléans continues to have a sizable French-speaking population, although the proportion of francophones has been decreasing in recent years.

Growth has focused around the Place d’Orléans shopping centre, a large shopping centre with over 175 stores situated off Ottawa Regional Road 174 (the Queensway). Many new business areas along Innes Road between Tenth Line Road and Mer Bleue Road and in the vicinity of Trim Road on the eastern end of the area have also been built recently which serve to diversify the commercial districts of the community. The country-wide housing boom starting from 2000 has also seen an extremely large amount of housing and residential areas being developed in the eastern Orléans area east of Trim Road and south of Innes Road, such as the new community called Avalon.