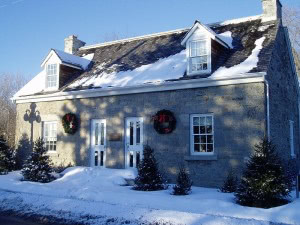 New Edinburgh is located to the northeast of the downtown core. It is bordered on the west by the Rideau River, to the north by the Ottawa River, to the south by Beechwood Avenue, and on the east by Princess Avenue, Lisgar Road, Rideau Terrace and Springfield Road. The area is an older neighbourhood and is relatively affluent. The Governor General of Canada’s large residence and grounds are located in New Edinburgh, as is 24 Sussex Drive, official residence of the Prime Minister of Canada.

The neighbourhood is home to several embassies and consulates, including those of Spain, South Africa, France, India, and Slovakia. Civil servants (in particular, employees of the nearby Foreign Affairs and International Trade Canada) compose a fair portion of the population. Like Rockcliffe Park, the neighbourhood is largely English-speaking, in comparison to the French-speaking district of Vanier to the south.

New Edinburgh was founded by Thomas McKay, one of the builders of the Rideau Canal lock system. He bought the land at the junction of the Ottawa and Rideau Rivers in 1829 and created a village named for Edinburgh in his native Scotland. The streets in the neighbourhood were named after McKay’s family. Crichton was his wife’s maiden name, Keefer his son in law, while Thomas, John, and Charles were his sons. The area was originally largely industrial, home to a number of mills using the power of the river. Originally part of Gloucester Township, New Edinburgh was incorporated as a separate village in 1866 by a special act of parliament, but was annexed in 1887 by Ottawa.