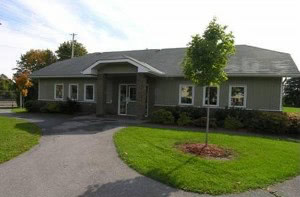 Tanglewood, also known as Tanglewood-Hillsdale, is a suburban neighbourhood in Knoxdale-Merivale Ward in the city of Ottawa. It is located within the former City of Nepean in the west end of the city. It is located in the federal and provincial ridings of Nepean-Carleton. It is informally bounded by CN Railway to the north, Merivale Road to the east, Hunt Club Road to the south, and Woodroffe Avenue to the west.