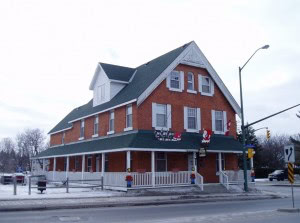 The first settlers to the area were Irish soldiers, arriving in the 1820s. The town itself was born in the 1850s by Jackson Stitt, for whom the town is named; he was also the first postmaster in the area.

The original town site, now known as “Old Stittsville”, was located at the present intersection of Carp Road and Hazeldean Road. It was a small crossroads, consisting of a few houses, a small inn, and a general store and post office, which was owned by Jackson Stitt.

By 1866, Stittsville was a post village with a population of 100, situated in the township of Goulborne. The village contained one general store, one common school, with an average attendance of seventeen pupils. The Loyal Orange Lodge, No. 210, met in Orange Hall, on the first Thursday in each month. The citizens included John S Argue, general merchant and postmaster.

The Great Carleton Fire of 1870 devastated the community, destroying nearly everything. The Hartin House and a handful of other buildings were all that was left standing. This was an extremely large fire, encompassing over 250,000 acres (1,000 km2) from Ottawa to Smiths Falls to Carleton Place.

The regrowth of Stittsville did not occur until the 1870s, when Canadian Pacific built a railway line connecting Ottawa to the booming lumber town of Carleton Place. The new town would be located at the current intersection of Abbott Street and Main Street. A train station, grist mill, grain elevators, and several hotels were just some of the features of this sleepy outpost town. The hamlet of Ashton (12 km to the west) also attributes its beginning to the railway line. In 1989, the tracks were removed, and CP Rail donated the land to be used as part of the Trans-Canada Trail.

Since the extension of the Queensway in the 1970s made travel from Ottawa quicker and easier, Stittsville has experienced rapid growth; it transformed from a quiet farming community of under 500 people to a suburb of 20,000, in just over 25 years. Many residents are employed in Ottawa’s high-tech industry or the federal government. Further growth is expected in the near future with the development of neighborhoods such as Jackson Trails and Kanata West to its north, Fernbank to its east and south and West Ridge to its west.