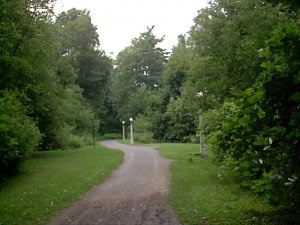 The area was first developed in 1910 by J.C. Brennan who shares his name with Brennan Avenue which is a residential street in the area. The neighbourhood is full of youth and lies quite near Hampton Park Plaza and Richmond Road. The park is maintained by the National Capital Commission.

Hampton Park has a fairly long history in the context of parks in the city of Ottawa. Baseball games were played in the park at least far back as 1916. An Ottawa Citizen article from the time indicates that the park was the location of a Trolley Line Baseball League game between Britannia and Ottawa West.

The park itself has existed in Ottawa’s west end for almost 100 years. The area was purchased by the Federal District Commission (now the National Capital Commission) in 1927. The park is several blocks in length and has a flat grassy area with benches as well as a wooded area with paths which is mainly used by people walking their dogs.