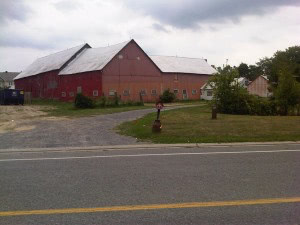 Bridlewood, a neighbourhood in west Ottawa,  is located east of Eagleson Road, south and west of the National Capital Commission Greenbelt, and north of Hope Side Road. This community is located in the southeast part of the former city of Kanata and is 12 KM from the boundary of pre-amalgamation Ottawa proper.

Bridlewood began to develop as a residential area in the 1980s. Previous to that, the land was used for agricultural purposes. William Teron spurred development with his purchase of agricultural land in order to create a model community that subsequently evolved into Kanata.

Most of the land that became Bridlewood was originally part of the Deevy farm (shown above). The farmhouse and barn remained in the centre of the community just off Equestrian Drive until it was demolished in 2013.