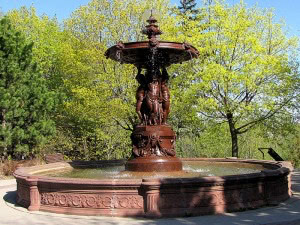 Just east of Centretown lies Sandy Hill, once one of the wealthiest neighbourhoods in town and was home to many notable Canadians such as Sir John A. MacDonald, Wilfred Laurier and, more recently, Max Keeping and Ed Broadbent. Consequently, some of the homes here are magnificent, though the area is very mixed, with seniors living near Ottawa University students, who live near to new immigrants and people in apartments or subsidized housing. There is also a high concentration of embassies in the neighborhood, as well as historic Laurier House and Le Cordon bleu cooking school. Nearby, dwellers can shop at 24 grocery stores, a large LCBO and see art-house films at the Bytowne Cinema, or they can stroll in the impressive Strathcona Park, with its signature water fountain and “ruin-like” play structure.

The neighbourhood is bordered on the west by the Rideau Canal and on the east by the Rideau River. To the north it stretches to Rideau Street and the Byward Market area while to the south it is bordered by the Queensway highway and Nicholas Street. The area is named for its hilliness, caused by the river, and its sandy soil, which makes it difficult to erect large buildings.

Sandy Hill was originally the estate of Louis-Théodore Besserer, who donated part of this land to University of Ottawa. It was subdivided and became home to most of Ottawa’s lumber barons. When Ottawa became the country’s capital, it became home to senior public servants and to the Prime Minister who lived at Stadacona Hall and later at what is now known as Laurier House.

The construction of bridges over the canal and the introduction of automobiles and streetcars made the area much closer to downtown, and it began to decline as the very wealthy moved to Rockcliffe Park. The neighbourhood became much denser and more middle class. It was predominantly francophone, and the 1960s Radio-Canada television network drama “La Côte de Sable” was set there, to this day the network’s only drama set outside Quebec.

The Sandy Hill area is split about equally between the English speaking and the francophone population, with large communities from Somalia, Lebanon, and Haiti. The area is very close to downtown, especially to the Rideau Centre, a large downtown shopping mall. The area is well served by mass transit and the transitway passes by the university.

Sandy Hill is often divided into four areas. North Sandy Hill consists of the area north of Laurier Avenue. This part of the neighbourhood is much older with many of its buildings dating from the nineteenth century. The area is subject to the influences of more recent developments on the thoroughfare of Rideau Street. South of Laurier is South Sandy Hill largely built after the Second World War, though there are a number of much older structures. The far south of neighbourhood below Mann Avenue is an area known as Strathcona Heights. This area is much smaller geographically than the other two but is as densely populated. It consists almost entirely of low-rise apartment buildings that are either subsidised housing or co-operatives. This area was completely redeveloped in the early 1990s. The area below the Strathcona Heights escarpment, near the Rideau River, is known as Robinson village. It was cut off from other neighbourhoods when highways were built, and contains low-rise houses and light industrial uses.