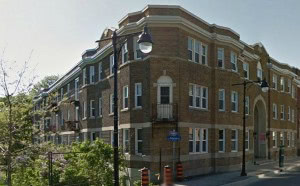 If you’re looking to settle in a neighbourhood with vintage style but modern conveniences, where young families and urban professionals rub shoulders, then the Glebe is the perfect space to plant your feet. Well-established as Ottawa’s hip and trendy hood, the Glebe is just south of the Queensway from the downtown core, and along Bank Street features many cool boutiques and tempting restaurants.

The Glebe is located just south of Ottawa’s downtown area in the Capital Ward with its northern border being demarcated by the Queensway. It is bounded by the Rideau Canal to the south and east. Many maps show the western edge as Bronson Avenue, but some also include the triangle farther west formed by Bronson, Carling Avenue, and Dow’s Lake. The Glebe Community Association uses the latter definition. As of 2011, the area’s population was 11,184.

The Glebe was one of Ottawa’s first suburbs. In 1900, the Ottawa Electric Street Railway was established, with one of its first routes running south along Bank Street. This allowed workers to live in the Glebe and take the street car to work. Most Glebe houses date from this era, and it became home to many middle-class workers. A number of the more upscale residences were designed by renowned Canadian architects W.E. Noffke and David Younghusband, while others were pattern-book homes built by local builders based on catalog designs similar to foursquare architecture elsewhere in North America.

In the middle part of the century the Glebe changed as the middle class moved to more distant suburbs such as Alta Vista and Nepean and the Glebe became transformed into a predominantly working-class neighbourhood with the houses subdivided into multiple apartments or turned into rooming houses.

The neighbourhood began to change again in the 1970s when it underwent significant gentrification and became one of Ottawa’s elite neighbourhoods. These changes are obvious in the census. From 1971 to 1996 the percentage of the population with university degrees rose from 10 to 60 percent. White collar employment grew from less than half to some 95%. While in 1971 Glebe residents were 14 percent poorer than the average citizen of Ottawa, in 1996 they were 18 percent wealthier.

The Glebe has a strong community association which, in addition to running a large community centre, lobbies the local government on issues such as traffic calming and neighbourhood development.

The Glebe is mostly populated by families; the area has many children, and consequently its social services are oriented towards youth. It is also almost entirely anglophone. The Glebe lies in the federal riding of Ottawa Centre, and the same provincial electoral district.

The stretch of Bank Street that runs through the Glebe is one of Ottawa’s premier shopping areas, with many small stores and restaurants offering a wide variety of services. Much of the rest of the Glebe consists of detached homes, many of them constructed in the early decades of the 20th century. Some of these homes are owner-occupied family residences, while others have been subdivided into multiple rental apartments.

The Glebe is home to Lansdowne Park which contains Frank Clair Stadium, where Ottawa’s Canadian Football League (CFL) football team (the Ottawa Redblacks) and the North American Soccer League (NASL)  soccer team (the Ottawa Fury) play their home games. Lansdowne Park also contains the Ottawa Civic Centre, which is the permanent home of the Ottawa 67’s and was the temporary home (1992–1995) for the Ottawa Senators before Canadian Tire Centre (originally called The Palladium) was completed.

The area that became the park was purchased from local farmers in 1868 by the City of Ottawa Agricultural Society. From the canal two bodies of water jut into the Glebe: Patterson Creek and Brown’s Inlet. These areas are surrounded by parks and some of the city’s most expensive homes.

The last Saturday in May of each year brings the “Great Glebe Garage Sale” to the neighbourhood; every household that participates puts items out for sale, attracting a large contingent of bargain hunters to the area. Sellers are expected to donate a portion of the proceeds to a designated charity.