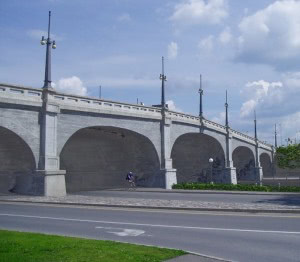 Just south of the Glebe neighbourhood lies Old Ottawa South, accessible by crossing the Rideau Canal across the Bank Street Canal Bridge. Along Bank, OOS boasts a wide variety of boutique shops, pubs, restaurants and services, including the Mayfair Theatre, one of only two surviving vintage movie theatres in Ottawa. Old Ottawa South is a tranquil, lovely neighbourhood characterized by tree-lined streets and Arts and Crafts homes built around the 1920s and 30s. Consequently, it’s a sought-after neighbourhood to live in, due to it’s close proximity to Centretown and the Glebe, but having a more suburban vibe.

OOS is an older urban neighbourhood in Capital Ward in Ottawa, Canada. Old Ottawa South is a relatively small and compact neighbourhood, located between the Rideau Canal (to the north) and the Rideau River (to the south). The eastern boundary is Avenue Road. Bronson Avenue forms the western border of the residential neighbourhood. Carleton University is on the other (western) side of Bronson but the campus can be considered to be geographically within Old Ottawa South as the campus is also nestled between the river and the canal.

Today, Ottawa South is a primarily upper middle class area. Proximity to the university has meant that the neighbourhood has been a haven for professors and students, although rising housing prices are driving out the latter. It is also one of Ottawa’s more politically progressive neighbourhoods and has been a stronghold for the New Democratic Party.

Many neighbourhood businesses line Bank Street, including the Ottawa Folklore Centre (which primarily sells stringed instruments), and some Lebanese stores towards the Southern end. This section of Bank Street is also well known for its antique stores. As part of a 2004 Bank Street redesign, inlaid metal maple leaves were added to the sidewalks inscribed with the names of Canadian folk musicians. Other new features included the removal of over-head powerlines, “traffic calming” measures, and the addition of more brick to the sidewalks.

The area was originally settled around 1814 by American and British settlers. In those years, even after the construction of the canal the area was fairly sparsely populated. The larger community south of the Rideau River around the Billings estate exerted more influence over the fledgling community than the city of Ottawa did in those days.

Shortly after Confederation in 1867 a bridge was built over the canal increasing access from the larger city to the north. The area was tentatively called Rideauville at the time. After the turn of the century the area grew very rapidly. Rideauville was incorporated as a police village in 1905 and was annexed to Ottawa in 1907. The streetcar tracks were extended to the area around 1910, again encouraging rapid growth. The old streetcar ran along a route roughly similar to today’s bus route #7, turning around in what is now Brewer Park. Hopewell school was built around this time.

Since the 1920s, the streetcars have been replaced by buses, stores have changed, and Carleton University has been constructed on the site of an old garbage dump. Many of the streetscapes and much of the housing has been preserved, however.

Around 300 residences and institutional buildings are included on Ottawa’s heritage reference list (an inventory of sites & structures potentially considered for legal protection as cultural heritage resources) from the area.

Old Ottawa South, used to be known simply as “Ottawa South”. The “old” designation came into use in the 1990s to distinguish the community from newer suburban developments in the south of Ottawa. “Old Ottawa South” is actually quite central and close to downtown by modern (post World War II) standards. The term “Ottawa South” is still in use in some contexts.