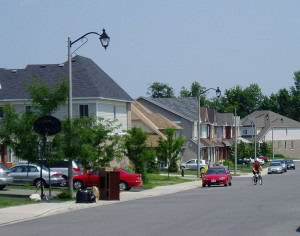 Barrhaven is a rapidly growing suburban neighbourhood in the southwest of the urban area of the city of Ottawa, about 17 km southwest of downtown Ottawa. Prior to amalgamation with Ottawa in 2001, Barrhaven was part of the City of Nepean.

Barrhaven is approximately bounded to the north by the Greenbelt, to the east by the Rideau River, to the west by Highway 416, and to the south by the new Half Moon Bay development along Cambrian Road south of the Jock River. The area is diagonally bisected by CN rail tracks. Barrhaven is surrounded by rural areas and farmland, with the exception of the growing Riverside South area across the Rideau River. Directly south of Barrhaven is Manotick, a commuter town of the city.

The Barrhaven area was long inhabited by First Nations peoples, and the modern Jockvale Road follows an ancient path that was originally a trail through the wilderness. In the 19th century the area became populated by European farmers as the area was divided into a number of rural homesteads.

The old Barrhaven School House located at Jockvale and Strandherd was in built in 1906. Today, the school stands as historic site. In 1911, the Canadian Northern Railway built a rail line from Ottawa to Toronto through the area. Fast passenger service was offered for many years from Fallowfield Station (near the intersection of Strandherd Dr and Cedarview Rd) to Ottawa and beyond. After many years of absence, passenger rail service was reintroduced to the area by Via Rail in the fall of 2002 through a new Fallowfield Station located at the intersection of Fallowfield Road and Woodroffe Avenue.

Modern Barrhaven was established in the 1960s, one of a group of new suburbs built outside the Greenbelt from the main city of Ottawa. Building in the area was begun by Mel Barr, for whom the community is named. Barr had originally purchased a 200-acre farm with the intent of constructing a horse racing track. However the Rideau Carleton Raceway was built further to the east, and Barr instead decided to develop his land for housing.

Barrhaven subsequently grew rapidly into a community of several tens of thousands of people. Commercial centres were slower to arrive. In 1990 the area was served by a single grocery store, had no movie theatre, and not even a bar. This has changed with the opening in 1991 of the vast Barrhaven Town Centre complex of big box stores and smaller commercial establishments, as well as a few smaller shopping malls.