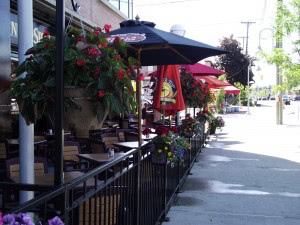 Lined with gastropubs, bistros and fine Italian restaurants, the main thoroughfare of Preston Street is bustling with activity and is what Ottawans associate with the city’s Little Italy. Though with limited parking and questionable public art, the area is nonetheless picturesque and clean and side streets are filled with beautiful old detached homes.

Bounded by Albert Street to the north, Carling Avenue to the south, the O-Train tracks to the west, and approximately Bronson Avenue to the east, Little Italy intersects with Chinatown, whose business district centres on Somerset Street.

In the 1960s a large section of the poorer neighbourhood was demolished, and replaced with the High School of Commerce, today the Adult High School in 1967.

Since 1974, each June the neighbourhood hosts the Italian Week festival, Ottawa’s celebration of Italian culture.

Big change is coming to the south end of the neighborhood at the intersection if Preston and Carling in the form of condo towers. Nearly a dozen projects are either proposed, approved or under construction, including three buildings that will claim the top three spots on the city’s list of tallest buildings. These projects are fueled by a recent service improvement announcement for the O-Train line which will result in an eight minute headway between trains at Carling Station as well as a new community design plan calling for high density near the transit station.