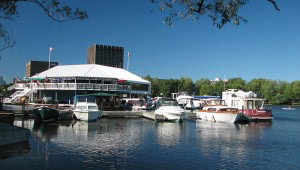 The area surrounding Dow’s Lake is some of the most beautiful in the city. Houses to the east of the major Pavillion are some of the grandest and affluent, built to suit the tastes of the original owners—from Tudor to Georgian to Spanish Colonial. The area comes alive with colour in spring during the Tulip Festival, and again in winter as one of the major venues during the Winterlude Festival.

It’s actually a small man-made lake on the Rideau Canal, situated two kilometres north of Hog’s Back Falls in the middle of Ottawa. It is at the south end of Preston Street, just south of Carling Avenue, and just to the west of Bronson Avenue. At the south end of the lake is Carleton University, and to the west is the Dominion Arboretum, at the edge of the Central Experimental Farm.

The lake is named after Abram Dow who owned land in this area in 1816. Before the construction of the Canal, this area was known as Dow’s Great Swamp. The lake was created when a dam was constructed along the north shore (Queen Elizabeth Driveway is now atop the dam) to allow flooding for the canal. Originally, the Rideau Canal was to run north from Dow’s Lake, but land speculation, and Colonel By’s reluctance to reward such speculation, resulted in the current location of the canal.

A rail tunnel passes under the lake which was formerly owned and operated by Canadian Pacific. This tunnel replaced a rail line that once crossed the lake on the surface. The OC Transpo introduced the ‘O-Train’ in 2001, a light-rail transit system, which remains the primary user of the tunnel.

In May, the surrounding park, Commissioner’s Park, displays tulips planted by the NCC (National Capital Commission) for the annual Canadian Tulip Festival. Over 50 varieties and approximately 300,000 tulips bloom each May along the Rideau Canal.

During the winter, Dow’s Lake freezes and becomes part of the world’s longest skating rink and one of the primary sites of the Winterlude festival in February, with events such as the ‘bed races’ and ‘waiter races’ on the ice.

At the north end of the lake a pavilion is situated over the water with three restaurants overlooking the water. They are Malone’s, Lago and Guadala Harry’s. Other services of the pavilion include canoe and paddle boat rentals, boat mooring and an indoor change area for skating. It is open year-round.