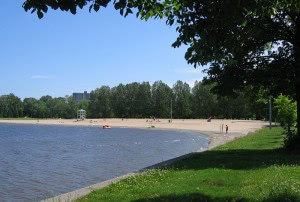 Britannia (also known as Britannia Bay or Britannia Village) is a group of neighbourhoods in Bay Ward in the west end of Ottawa. It is located on the Ottawa River across from Aylmer, Quebec, adjacent to its namesake, Britannia Bay, north of Carling Avenue and west of the Sir John A. Macdonald Parkway. The area constituted a municipal ward from 1973 to 1994 (Britannia Ward).

The area has a mix of low and high income housing. The lower income areas of the area are closer to Richmond Road in the south, and the more affluent areas are located in the community of Britannia Village in the north, which includes the Britannia Yacht Club at the north end of Britannia Road. Many of Britannia’s old cottages live on as bungalows, surrounded by water, forest, and hills.

The Ottawa River Pathway is a very long segment of Capital Pathway along the south bank of almost the entire length Ottawa’s portion of the Ottawa River. A bike path extends from Britannia some 12 kilometers to the Parliament buildings downtown. Today, there is probably no neighbourhood in Ottawa more mixed than Britannia, forming a contrast with many of the homogenized satellite communities that have become Ottawa.

The land where Britannia stands was once a part of a large estate, owned by Captain John LeBreton in 1818. John LeBreton advertised the sale of real estate in the village area in 1828. LCol Joseph Bouchette referred to Lac Deschênes as Chaudiere Lake in 1832. Around 1876, an apple orchard near the head of the rapids was undermined and washed away during a big flood.

The Britannia Yacht Club was established in 1887. The Club house still retains its historic appearance. Members of the club have won many championships and Olympic gold medals. Canada’s only Gold medal winner from the 1936 Summer Olympics, Frank Amyot, paddled these waters in the 1920s and 1930s. The Club’s Dragon Lounge’s bar was fashioned out of a dragon sail boat. The Clubhouse was included amongst other architecturally interesting and historically significant buildings in Doors Open Ottawa, held June 2 and 3, 2012.

The Britannia Bay post office was established in 1889, under the community’s first postmistress Mrs C Hand.

The “G.B. Greene”, known as ‘Queen of the River,’ a double-decked side wheeler steamer built by the Upper Ottawa Improvement Company in 1896, took up to 250 passengers up the Ottawa River to Chats Falls on daily pleasure excursions. Although she was dismantled in 1946, her anchor remains at Britannia Beach today.

In 1899, the Ottawa Electric Railway Company built a street-car line to Britannia. In 1899, the Metropolitan Power Company was formed to construct a power house just north of the Britannia Boathouse Club with a 2000-foot canal to extend to the lower end of the Lac Deschênes Rapids. The area became popular at the turn of the century because the Ottawa Gas and Electric company extended the trolley line and created an amusement park at Britannia beach to encourage users of the trolley system to use the system on weekends. A cottage and beach community resulted.

The first trip of the Ottawa Electric Railway Car 202 Britannia-on-the-Bay on the Britannia Line was 13 January 1900. The electric line to the village on Britannia Bay was open for regular traffic in the spring 1900.

By 1904, the trolley company had built a wide pier 1,000 feet long out into the river. Along the east side, there were cottages, and the Boat club house. Along the south side, the land between the road and the lake has been turned into a park, with pavilions and bath houses. The beach was ideal for bathing, since people could wade out almost to the end of the pier without danger. The village, with its two churches and neat cottages, was one of Ottawa’s most fashionable suburbs in 1904. Justice Mosgrove had a 35 acre grape farm, not far from Britannia Park, on the river.

Rapid growth in all directions during the 20th century meant that it was soon surrounded by the western suburb of Nepean. Larger, modern houses were built in-between cottages. Nowadays it is simply an out-of-the-way part of west end of Ottawa, featuring among other things Barks and Bubbles dog-washing business, Regina Street Public School, a movie theatre complex, Britannia Baptist Church, a Britannia Conservation area centred on the National Capital Commission’s (Mud Lake), and Britannia beach.

The neighbourhood has a perhaps one of its kind 1967 EXPO style dome covering a local children’s hockey rink that made it to the top 500 architecturally significant buildings in Canada in 2002 as voted by CIRA.