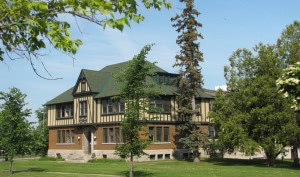 Civic Hospital is named after the Ottawa Civic Hospital, which is located in the neighbourhood and is bounded on the west by Island Park Drive, on the north by Queensway, on the east by the O-Train and on the south by Carling Avenue.

The main streets in the neighbourhood are Parkdale Drive, Sherwood Drive, and Holland Avenue ending at Tunney’s Pasture. The neighbourhood is served by Carling Station on the O-Train line.

The Central Experimental Farm (CEF) is an agricultural facility, working farm, and research centre of the Research Branch of Agriculture and Agri-Food Canada. As the name indicates, this farm is centrally located in and now surrounded by the City of Ottawa. The 4 square kilometres (1.5 sq mi) farm is a National Historic Site of Canada and most buildings are protected and preserved as heritage buildings.

The CEF original intent was to perform scientific research for improvement in agricultural methods and crops. While such research is still being conducted, the park-like atmosphere of the CEF has become an important place of recreation and education for the residents of Ottawa. Furthermore, over the years several other departments and agencies have encroached onto the CEF property, such as Natural Resources Canada, National Defence (HMCS Carleton on Dow’s Lake), and the Ottawa Civic Hospital (helicopter pad).

The CEF is bordered by the Rideau Canal (a National Historic Site as well) to the east, Prince of Wales Drive to the South-East, Baseline Road to the south, and Merivale and Fisher Roads to the west, and Carling Avenue to the north.