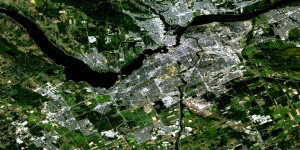 Not to be confused with a park in the Glebe of the same name, Central Park is neighbourhood in River Ward in the west end of Ottawa. It is bounded on the east by Merivale Road, on the south by Baseline Road, on the west by Clyde Avenue and on the north by the Carlington neighbourhood.

The neighbourhood is fairly new, having been built in the late 1990s and early 2000s. Before Central Park was built, it was originally part of the Central Experimental Farm until the City of Ottawa bought it. The communitty used to be a wooded area.

Central Park is known for its New York City themed street names, such as Gotham, Gramercy and Manhattan. The name of the neighbourhood itself is taken from Central Park.