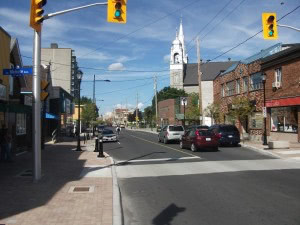 The neighbourhood is home to the western half of Wellington Street West BIA which extends into neighbouring Hintonburg. The area is served on Ottawa’s Transitway by Tunney’s Pasture Station, which runs along the neighbourhood’s northern border, parallel to Scott Street.

Wellington Street West is a 2-lane arterial road west of downtown Ottawa, Ontario and is not to be confused with the principal Wellington Street in downtown Ottawa. It begins at Bayview Road as a westbound one-way street until it merges with Somerset Street to attain its full right-of-way. The section from Somerset Street to Holland Avenue bisects the Hintonburg neighbourhood, while the section from Holland Avenue to Western Avenue forms the backbone of the gentrified Wellington West (or Wellington Village) community. From Island Park Drive westward, the alignment is known as Richmond Road.