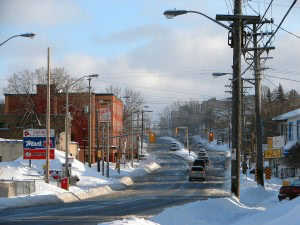 Carlington is a neighbourhood located in River Ward in the west-end of Ottawa. The community association boundaries are Clyde Avenue to the west, Carling Avenue to the north, Fisher Avenue to the east and the Central Experimental Farm Pathway to the south.

Carlington contains less than 435 older pre-1945 homes, primarily along Fisher Avenue. Some 2000 dwellings were built from 1945 to 1960. The houses built in the time period immediately following World War II were meant for returning veterans and are therefore known as “war homes” or “veteran homes”. Many of the street names in the neighbourhood also reflect this military heritage (e.g. Viscount Ave, Admiral Ave, General Ave, Marshall Ave, Veteran Ave, Crerar Ave.). From 1961 to 1970, 1440 homes and apartments were built and from 1971 to 1980, another 1380. After 1981, the construction of new dwellings sharply dropped to less than 400 for the remainder of the 20th century. Today, there are new homes being built as the some of the veteran homes are demolished.

A notable geographic feature in the neighbourhood is Carlington Hill, a large hill with long gradual slopes. Part of it was formerly a ski hill with tow lift (known as Anne Heggtveit Hill), but now used as a City of Ottawa approved sledding hill. The western part of the hill was quarried for limestone, which was crushed and used as lime for the production of cement. The former quarry is now used as a city snow dump. Also on top of the hill is the Carlington Heights Reservoir and Pump Station which supplies approximately one third of the City’s water.

The neighbourhood is home to Westgate Shopping Centre and the Royal Ottawa Hospital. Merivale Road is Carlington’s traditional main street goes through the centre of residential Carlington.

The Carlington Business Area is west of Kirkwood, north of Carlington Hill, south of the Queensway (417), and east of Maitland. The main streets are Laperierre and Woodward.

The major park in the neighbourhood is Carlington Park which includes, in addition to the Carlington Sledding Hill, the J. Alph Dulude Arena and four baseball diamonds. There are five others park in Carlington; Bellevue Manor, Alexander, Harrold Place, Meadowvale Terrace and Raven Park (John Smith Field).

The neighbourhood is bordered to the south by the Experimental Farm bike path, which connects to the Pinecrest Creek Pathway to the west, and to the Rideau Canal West pathway to the east. This path is maintained by the National Capital Commission.