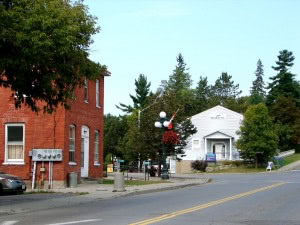 Carp is a community in West Carleton-March Ward in the City of Ottawa, Ontario, Canada, located in the northwestern portion of the municipality on the Carp River. It is bordered by Craig Sideroad/Murphy Sideroad on the north, the former Township limits on the east, March Road on the south and Thomas Argue Road on the west.

By 1866, Carp was a post village with a population of 200 of the township of Huntley on the Carp river, 20 miles from Ottawa. The village contained three stores, workshops, three hotels, and a town hall.

The village takes its name from the Carp River which runs through the village. This river initially took its name due to the overwhelming amount of the carp fish that lived within it. In the early 19th century, the river was overrun with the fish because farmers used to throw all of their dead animals in it. Conversely, in “Carleton Saga” by Harry and Olive Walker, the over-abundant fish is said by early French explorers to be suckers and mud-pout, that in French translate as carpe.

The main street was formerly a section of the Trans-Canada Highway and carried much of the traffic coming from the west into Ottawa. However the village has been bypassed with the development of the Highway 417.

With the amalgamation of municipal governments in the region in 2001, Carp is now governed as part of the new city of Ottawa. Carp is used as a mailing address for most of the former Huntley Township. As such, residents of this large area will identify themselves as living in Carp although they may live large distances from the village prope

Carp’s main attraction is the Diefenbunker, Canada’s Cold War museum located just north of the village, and was featured in the film The Sum of All Fears. This formerly top-secret underground bunker was originally built to house key members of the government in the event of a nuclear attack on Ottawa.

The Carp Exhibit Hall, one of the few remaining octagonal frame fairground buildings in Ontario, continues to function as the main fairground hall for the Carp Fair held in September each year since 1880. During the remainder of the year, the buildings and grounds serve the popular Carp Farmers’ Market held each Saturday from May to October. The red-painted Exhibit Hall with white trim, which remains a focal point in Carp was included amongst other architecturally interesting and historically significant buildings in Doors Open Ottawa, held June 2 and 3, 2012.

The Carleton Masonic Lodge #465, a turn of the Century (1900’s) Church building has been the Masonic Lodge in the Village of Carp since 1925. The building features original stained glass windows and is decorated with beautiful oak furniture that was originally located in a WWI Military Masonic Lodge in France. The original Masonic lodge building, which dates to 1904, was destroyed by fire in 1920.