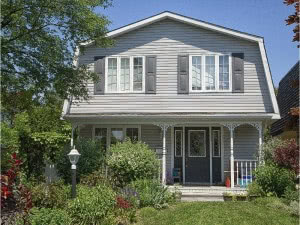 Bells Corners is a suburban community in College Ward in the city of Ottawa, Canada. It is located in the former city of Nepean within Ottawa’s western Greenbelt.

The community owes its existence to its location on the Richmond Road midway between Richmond Landing near Bytown (now Ottawa) and the military settlement at Richmond, at the junction with the concession road leading west to the Hazeldean neighbourhood in neighbouring Goulbourn Township. It was also the junction between Richmond Road and the “base line” which was the boundary road between concessions on the Ottawa front and those on the Rideau front. Hence, the plural “Corners”. It was named after Hugh Bell, who owned a tavern on the site of the present day Bells Corners Public School from 1834 to 1863.

Prior to that it was known locally as just “the Corners”, but when the first post office opened on August 6, 1851 it had to adopt a formal name and became Bell’s Corners. Today it is most commonly spelled without the apostrophe.

By 1866/7 Bells Corners was a post village with a population of 150 in the township of Nepean, county of Carleton, on the Ottawa and Nepean Macadamized road, 10 miles from Ottawa. The village had a daily mail, two stores, a school and a church which was used by the Church of England, Presbyterians, and Wesleyan Methodists. The early citizens included: Adam Abbott, a general merchant; Hugh I Bell, a farmer; George Arnold, a postmaster; E. Brown, a bailiff 7th Division Court; and William Brownlee, a general merchant boot & shoemaker.

In 1866, the 43rd Battalion of Infantry (otherwise known as the Carleton Blazers) was formed in Bells Corners with companies in many of the surrounding communities and absorbed Ottawa’s volunteer rifle company. By 1869, Bell’s Corners was a Village with a population of 120 in the Township of County Carleton. It was on the stage line from Town Ottawa to Perth. Most of Bells Corners was destroyed by fire in August 1870.

The oldest buildings in Bells Corners are the East India Company restaurant and conference centre, formerly Hartin’s Hotel, built after the fire in 1870 on the site of Robert Malcomson’s Tavern (David Hartin was married to Robert Malcomson’s daughter Sarah); and, The Spa which occupies the old Drummond Methodist Church built in 1898. This church used stone from the old Union Church (now the site of the Bells Corners Union Cemetery on Old Richmond Road) built in 1853 and the only building in Bells Corners to survive the fire of 1870.

On the north side of Robertson Road between Bells Corners and Hazeldean was the first of several Nepean sandstone quarries from which rock was taken for the exterior of the Parliament Buildings, Confederation Building, Connaught Building and what is now the Canadian Museum of Nature. It can be seen also in many smaller buildings throughout the city. Dick Williams, a Welshman who came to Canada in 1902, opened a small quarry in the Nepean formation on the farm of his father-in-law on lot 3, concession II, Ottawa front. The two began making paving stones in 1912 and in 1916 they were joined by a young Scot, Archie Campbell, a recently apprenticed quarryman. The quarry eventually became known as Campbell’s Quarry. Contracts were signed with seven different quarries, but the bulk of the stone for the Centre Block and the Peace Tower came from Campbell’s Quarry. According to Campbell “Our first order came from Peter Lyall Construction Company for 1,000 tons of sandstone all for the Parliament Buildings. When we got the parliament job there were several hundred men on the job and they just gobbled up the stone. We couldn’t get the stone out fast enough … Stone was hauled up to the building site by teams of horses, struggling along poor roads with six ton loads. Each team could make but one trip a day.” The quarry continued operation under various owners until September 1962, when the National Capital Commission expropriated the land for part of Ottawa’s Greenbelt. Natural Resources Canada offices, laboratories and experimental sites now occupy the quarry and surrounding property. The workings of the quarry are reported to still be intact as they were when surveyed by Alice Wilson in the mid 1950s however the area is not open to the general public.

Once a rural community with many dairy farms, Bells Corners is now a residential, commercial and industrial island surrounded by greenbelt, woods and farmland. For a time Bells Corners was a hi-tech area and home to such Canadian technology icons as Computing Devices Canada, the Ottawa-based defence electronics company (bought by General Dynamics), which blazed the trail for later defence technology firms in what would become known as Silicon Valley North in neighbouring Kanata.

Many of the houses in Bells Corners are in a neighbourhood called Lynwood Village (Bells Corners East), built in the late fifties and early sixties. It is one of the first examples of tract housing in Ottawa. The first area to be developed was Stinson Avenue in 1950. This was followed by Arbeatha Park in 1955-58, and then Lynwood Village proper in 1958-66. In the fifties Nepean had acknowledged the rights of property owners to subdivide their land for housing but usually individual lots were sold to small builders. In Lynwood Village, land speculators Lloyd Francis and Donald Sim had assembled a vast tract of land. In 1958, they brought in Bill Teron to build the entire subdivision. By 1960, four hundred families lived in Teron’s bungalows; another four hundred homes were built in 1961. Many more were built in 1962, 1963, 1964, and 1965. The last area of Lynwood to be developed was the area bounded by Richmond, Robertson, and Moodie Drive in 1966. Today there are over 1700 homes in the Lynwood area.

The magnitude of the shift to tract housing is demonstrated by the fact that most of the subdivisions built in Ottawa during the rest of the sixties were the work of three large firms (Minto, Campeau and Assaly/Johannsen).

To the west of Lynwood Village is Westcliffe Estates (Bells Corners West), founded in 1969, it is a growing community of over 2000 homes. Assaly Construction and later the Thomas C. Assaly Corporation built most of the older (1969–76) homes in this area. The Westcliffe community is characterized by significantly higher residential densities than other parts of Bells Corners. There is a multi-storey housing complex operated by Nepean Housing as well as a multi-storey senior’s residence and a co-operative housing project. The Terrace Drive/Mill Hill area of Westcliffe Estates was developed in 1986.

Bells Corners has a reputation as a retirement community, hosting three retirement homes in Lynwood Village and another in Westcliffe Estates.

Bells Corners is also the home of Bellwood Estates (formerly the Bellwood Mobile Home Park), consisting of 256 homes. The park was established in 1959 By Ken Hughes. It is now owned and operated by Parkbridge Lifestyle Communities.