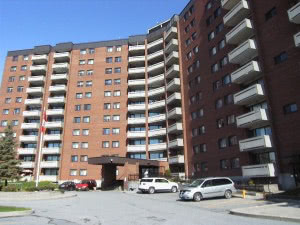 Bayshore, also known as Accora Village, is a neighbourhood in Bay Ward in the west end of Ottawa. Prior to amalgamation in 2001, the neighbourhood was in the City of Nepean. It is bounded east by Bayshore Drive, to the north Carling Avenue, to the west Holly Acres Drive and the Lakeview neighbourhood, and the to the south Ontario Highway 417. The main street in Bayshore is Woodridge Crescent, while the Bayshore Station is the major bus transit station.

The neighbourhood is characterized by rental communities. The homes are townhouses (row houses), garden homes and high-rise condominiums buildings. Most of the population in the community features different ethic groups. Most immigrants are from the Philippines (330), Iraq (315), and Afghanistan (205). The neighbourhood has a large Muslim population. The 2011 National Household Survey reported that 34% of the people in Bayshore’s Census Tract were Muslim.

The community was first built in 1963-1965. The developer was the Minto Group which is a rental community for neighbourhoods in Ottawa. In the 1970s and 1980s more townhouses and high-rises were built. In the early 2000s, the community changed ownership to Ferguslea Properties Inc, which is owned by Dan Greenberg. In 2013, Ferguslea announced that they would manage Accora Village, and all staff became employees of Ferguslea.

The main attraction is the Bayshore Shopping Centre which was built in 1973 and had two floors extended in 1987. Bayshore is currently doing a $270 million renovation, including a new parking garage, updates to the mall, and the addition of several stores such as H&M, Victoria’s Secret and Zara.