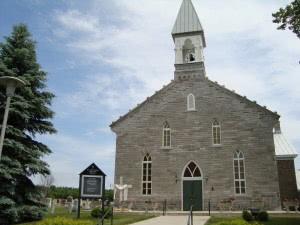 Fallowfield is an unincorporated village (also known as Fallowfield Village) in the city of Ottawa located south-west of Bells Corners, west of Barrhaven and the 416 and north-east of Richmond within the southwest area of the city.

Fallowfield is located in the triangle of Fallowfield Road, Richmond Road and Steeple Hill Crescent and also includes Richmond Road north up to Hope Side Road. The village serves as a bedroom community for the larger urban area of Ottawa as there are no retail or commercial enterprises in the village. It assumes a rather prominent position over the surrounding countryside as the major part of the Village is located on a gently terraced escarpment.

Fallowfield Village was originally settled in the 1820s by Irish immigrants from Tipperary and Cork Counties at which time the majority of Carleton County was similarly settled. There are two churches, both along Steeple Hill; St. Patrick’s Roman Catholic Church (pictured) built in 1833 with the current stone chapel completed in 1866 and the Fallowfield United Church built in 1868 with the current chapel completed in 1886. The cornerstone for the United (then Methodist) church was laid by Canada’s first Prime Minister, Sir John A. Macdonald. The name for the area was Piety Hill but the village name was not formalized to Fallowfield until June 1, 1872, with the appointment of a postmaster, P. Omeara, and the opening of a post office. As a direct result of this action, the village received its name, the origin of which was inspired by nearby fields that were in the process of being fallowed for the summer and is not historically linked to Fallowfield, in Manchester, England. The post office was closed June 30, 1914. For a timeline perspective, the Rideau Canal was built between 1826 and 1832 and the village of Richmond, to the southwest, was settled in 1818.

Fallowfield village was a strategic stop-over point for travels between Perth, Richmond and Bytown (later to become Ottawa). By the turn of the century, Fallowfield was a bustling village and it became a favourite stopping place for travellers, especially farmers with their produce wagons and horse teams, en route to and from the market in Ottawa. At one time there were four hotels in the village to serve the travelling public. In addition, there were three carriage shops, two blacksmiths, a grist mill, tailor shop, cheese factory, shoemaker, general store and weigh scales for the farmers to weigh their produce. The widespread use of the automobile most likely rendered the village into a bedroom community as farther distances could be travelled in one day with no need for stop overs like what Fallowfield village offered.

The majority of the development was established in the early 1980s. Fallowfield village was originally part of Carleton County, Nepean but has been within the City of Ottawa since January 1, 2001 as part of amalgamation.