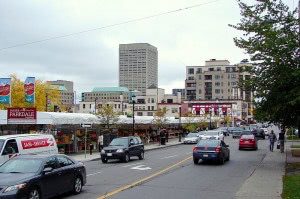 Hintonburg is in Kitchissippi Ward, located west of the Downtown core. It is a historically working-class, predominately residential neighbourhood, with a commercial strip located along Wellington Street West. It is home to the Parkdale Farmer’s Market, located along Parkdale Avenue, just north of Wellington.

Its eastern border is the O-Train line, just west of Preston Street, with Centretown West/Somerset Heights neighbourhood to the east. To the north it is bounded by the transitway (originally the Canadian Pacific Railway main line), along Scott Street, with Mechanicsville beyond. To the south it is bounded by the Queensway (originally the Canadian National Railway main line) (417 Highway) and to the west by Holland Avenue (Hintonburg Community Association borders) or as far west as Island Park Drive.

Originally part of Nepean Township, the area was first settled in 1826, growing in size the village of Hintonburg was incorporated as a village in 1893. It was named after Joseph Hinton, a community leader who died in 1884. As the city of Ottawa grew it expanded west and Hintonburg was annexed to Ottawa in 1907. The Ahearne’s Ottawa Street Railway Company ran a street car line through the area, continuing along further west along Byron Avenue (now a recreational path) and it soon became home to mostly blue collar workers who commuted into downtown.

Businesses on Wellington are characterised by a mixture of largely proprietor-operated retail and service shops. Bars and restaurants have multiplied, especially along the stretch from Parkdale to Holland.

Holland Avenue, a four-lane north-south avenue leading directly south of Tunney’s Pasture, has developed a stretch of restaurants and commercial businesses to serve the government complex. At the corner of Holland and Wellington, the Irving Greenberg Theatre Centre was opened in 2007 for live theatre.

Parkdale Avenue, a two-lane north-south avenue is a busy road. When the Queensway was built in the 1960s, Parkdale was chosen for an interchange rather than the four-lane Holland Avenue. This leads to daily traffic jams at “rush hour.” At its north end, some vestiges of the industrial area along the Scott Street rail line exist and are being converted into artists’ space. The popular warm-weather Parkdale Market, a farmers’ market, just north of Wellington is the home of about 20 stalls, of local and imported produce and flowers. To the south of Wellington, it is residential on both sides.

Hintonburg is home to the QUAD. The QUAD, an acronym that stands for Quartier des artistes/Arts District, blends cultural expression, community spirit and heritage character to create a special neighbourhood that embraces all arts disciplines, was established in 2003. Several galleries have opened since 2006 in the vicinity of the Parkdale Market.

In 2005, the Hintonburg community Association (HCA) launched the ArtsPark annual event in the Parkdale Market featuring the works of Ottawa artists and musicians to highlight the community’s growing role as an arts district in the city. Regular activities are put on at the Hintonburg Community Centre, including outdoor films in the summer.

Hintonburg is the long-time home of the Orpheus Musical Theatre Society, located on Fairmont Avenue. The Society produces several musical productions every year. The productions are mounted at the Centrepointe Theatre in Nepean.

In 2007 the Great Canadian Theatre Company (GCTC) relocated to Hintonburg, in a new theatre built at Holland and Wellington.