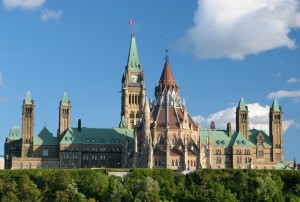 It’s hard to pinpoint only ten top attractions in the Ottawa area. In fact, to be honest, we had to cheat a bit and combine a few sights into one just to get some of our favourites included. There’s just a wealth of things to do in Ottawa—from arts and culture, historical sights and landmarks, sports and leisure, to gardens, parks and breathtaking natural views, this city has it all.

No visit to Ottawa could possibly miss a tour of Parliament Hill. Be sure to see the carillon, the library and take a tour of the grounds to see all the statues dotted all over the Hill. After your visit, pop over to the historic Chateau Laurier for high tea. The main floor has several impressive conference rooms and lounges to explore, and don’t miss peeking at the Victorian indoor swimming pool downstairs. Finally, walk over to the War Memorial, where you’ll get great views of the National Arts Centre as well.[/one_half] [one_half last=”yes”]

The ByWard Market is a beautiful open market that’s great to visit in the warmer months. Stalls of fresh fruits, vegetables, flowers and “Canadiana” foods and crafts are fun to browse through. There are also several fun boutiques and shops that sell anything from kitschy tourist gift items to clothes, art, food and toiletries. When night falls, the area turns into a thriving nightlife spot, with several popular bars, pubs and restaurants to serve locals and tourists alike.
[/one_half]

The history of the Rideau Canal is so tied in to the history of Ottawa, that it simply can’t be missed. The canal is 200km in length and connects Ottawa by water to Kingston. Opened in 1832, today it is the oldest continuously operated canal system in North America, and it was registered as a UNESCO World Heritage Site in 2007. In winter, a section of the Canal becomes the world’s longest skating rink. The Bytown Museum located beside the canal’s first eight locks between Parliament Hill and the Chateau Laurier, offers visits insight into the building of the Canal and Ottawa’s history when it was known as Bytown. Walking north east along Sussex, you’ll eventually be rewarded with the view of Rideau Falls.

The National Gallery is the finest collection of Canadian and world art in Canada. Funded in 1880, the collection now resides in an impressive glass and concrete structure created by Moshe Safdie. Inside, you’ll see an excellent collection of art from the Group of Seven and other Canadian artists, as well as major works from artists such as Klimt, Picasso, Warhol, Léger, Pollack, van Gogh and others. Don’t miss seeing the breathtaking Rideau Chapel, which features the entire interior the now-demolished Convent of Our Lady Sacred Heart. [/one_half]

The ornamental gardens and arboretum which comprise the bulk of the public garden areas of the Experimental Farm is well worth a visit for horticulturalists and garden enthusiasts in general. Visiting in various blooming seasons, visitors can delight and learn about a wide variety of irises, peonies, roses, lilies, lilacs, rock garden plants and ornamental grasses, to name a few. The rock garden and the pond with small frog water features are especially lovely to walk through. The Dominion Observatory is closed to the public, but is still a beautiful building to explore from the exterior. Nearby, check out Dow’s Lake Pavilion in springtime to witness massive blocks of vibrant tulips of all varieties.  [/one_half] [one_half last=”yes”]

The Canadian Museum of History (formally the Museum of Civilization) is across the river in Gatineau, QC and is the most popular site in the whole National Capital Region. Designed by Douglas Cardinal, the building itself is remarkable and unique. The collection of artifacts celebrates and records the history of Canada and its people. Permanent collections include the set of twelve totem poles in the massive Grand Hall, the history of Aboriginal Peoples in the First Peoples Hall, Canada Hall, which documents the arrival of colonialists and explorers, and Face to Face, which highlights the history of several prominent Canadians. Other museums to hit if you have time include the Canadian War Museum, the Canadian Aviation and Space Museum, the Diefenbunker Museum and Laurier House. [/one_half]

Nepean Point offers viewers one of the best and most spectacular viewpoints of the city. A short climb from the National Gallery, the hill has an amphitheatre and large statue of Samuel de Champlain, holding an astrolobe. From Nepean Point you can see both the Ottawa and Gatineau skylines, including the Ottawa River and Canal’s first eight locks, Parliament Hill, the Chateau Laurier, the National Gallery, Alexandra Bridge, the Museum of History and the Casino Lac Leamy, to name a few.  It’s an amazing view day or night, winter or summer. [/one_half] [one_half last=”yes”]

The home of the current Governor General, Rideau Hall is also used as the residency of the reigning monarch of Canada when visiting. The majority of the home, located at 1 Sussex Drive, is used, however, for state affairs, such as award ceremonies, investitures and official swearing-ins, and the hall and extensive grounds can be visited by the public year round. The hall itself is home to many priceless works of art and furniture, and recently has begun rotating artworks in “exhibition” style format. Cricket matches and garden parties take place on the grounds in summer, and in winter, the public can ice skate on a special rink. [/one_half]

Built in 1996, the Casino Lac Leamy is a massive complex with a 349-room Hilton hotel and an 1100-seat theatre that is one of the region’s main music venues. The casino is built on a rocky precipice over what was once International Portland Cement Company quarry but is today Lac de la Carrière. This lake features a large fountain, whose jet is visible through much of downtown Gatineau during the summer. To the east of the casino is Lac Leamy, from which it gets its name. Of course the main feature is the casino itself, which has more than 1,800 slot machines and more than 65 tables including roulette, blackjack, baccarat, craps and Texas hold ’em poker. If played cautiously and responsibly, the casino can be a fun and inexpensive night out.[/one_half] [one_half last=”yes”]

Running along Somerset Street West from Bay street going west, Chinatown is actually an eclectic mix of Asian communities: predominately Chinese, Japanese, Korean, Thai and Vietnamese. The area’s main feature of note is the glorious Gate that was unveiled in 2010. It’s one of the most stunning gates in Canada, arguably the most beautiful. Lining the streets are dozens of shops selling Asian exports such as pottery, gifts and groceries,  as well as many restaurants specializing in Asian cuisine, such as phö Vietnamese noodle houses and Chinese take-outs. [/one_half]