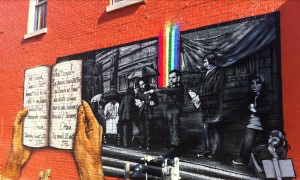 The Village is a gay, lesbian, bisexual, trans-friendly area in Ottawa’s downtown core, covering a six by two block area surrounding Bank Street—from Nepean to James Streets (north to south) and Kent and O’Connor Streets (west to east). This area is the home of over 20 businesses and services that directly serve the GLBT community, many of which are gay-owned and -operated, with another nearly 40 other locations that proudly support and serve the Village and Ottawa’s GLBT community.

The Village also provides a safe space for the GLBT community to work, live and play, celebrates its history, culture and diversity, and is a burgeoning tourist destination. Some of its key features include a set of six banners with photographs and quotes of Oscar Wilde, and the “We Demand” mural, a wall painting commemorating the 40th anniversary of the We Demand protest, the first GLBT civil rights protest in Canada, on August 28, 1971. Both of these public art projects are located on the corner of Bank and Gilmour.

Top 10 Things to Do in Ottawa

Where to Go on a First Date