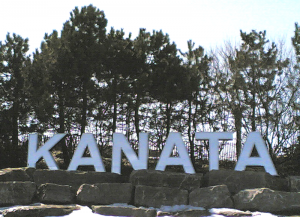 The area that is today Kanata was originally part of the Township of March, and was first settled by Europeans in the early nineteenth century. One site dating from this era is Pinhey’s Point.

It remained mainly agricultural until the 1960s when it became the site of heavy development. Modern Kanata is largely the creation of Bill Teron, a developer and urban planner who purchased over 3,000 acres of rural land and set about building a model community. Unlike other suburbs, Kanata was designed to have a mix of densities and commercial and residential properties. It contained large amounts of open space, and was to be surrounded by a greenbelt. A reflection of the garden city movement, the area was divided into a series of communities, each of which was intended to have their own commercial centres and unique cultures. These include Beaverbrook, Glen Cairn, Bridlewood, Katimavik, Hazeldean, Morgan’s Grant, and Kanata Lakes.

The community grew rapidly due to the influx of high tech workers looking to capitalize on the new economical cityscape. The Province of Ontario incorporated Kanata as a city in 1978 out of the Township of March, and portions of the Township of Goulbourn and the Township of Nepean (subsequently the City of Nepean). On September 20, 1998, the city of Kanata dedicated a cenotaph in “Village Green Memorial Park” dedicated to those who served their country in War and Peace. It remained a city until 2001, when the province created a new (amalgamated) City of Ottawa that included the City of Kanata.