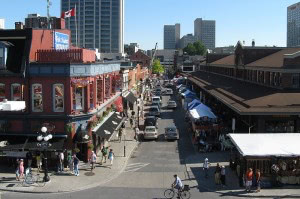 The district is bordered on the west by Sussex Drive, on the east by Cumberland Street. It stretches northwards to Cathcart Street, while to the south it is bordered by Rideau Street. The name refers to the old ‘By Ward’ of the City of Ottawa (‘By’ deriving from the surname of the engineer, Colonel John By, who was the area’s original surveyor).

Traditionally, the ByWard Market area has been a focal point for Ottawa’s French and Irish communities. The large Catholic community supported Notre Dame Cathedral, one of the largest and oldest Roman Catholic churches in Ottawa. The shape of the cathedral was taken into account in the design of the National Gallery of Canada, which was built across Sussex Drive.

The ByWard Market has constantly been an area of fluid change, adapting to the increasingly cosmopolitan nature of downtown Ottawa, as well as trends in Canadian society as a whole. Recently, a multitude of restaurants and specialty food stores have sprouted around the market area, making this neighbourhood one of the liveliest in Ottawa outside of normal business hours. A four block area around the market provides the most dense concentration of eating places, bars and nightclubs in the National Capital Region. The areas beyond this zone also offer boutiques and restaurants in abundance, and are frequented by a considerable number of buskers (street performers). Having acquired a reputation as the city’s premier bar district, Byward Market is thronged at night with university students and other young adults.

Over the years the city has developed a series of five small, human-scale, open air courtyards, immediately east of Sussex Drive, stretching from Saint Patrick Street to George Street. These cobblestone courtyards are filled with flowers, park benches, fountains and sculptures. Several of the houses surrounding them are historic buildings.

At the other extreme on the west side of Sussex Drive is the United States Embassy. The building’s design, by noted architect David Childs, was somewhat controversial in Ottawa. Others complained that the structure overshadowed the historic market.

The neighbourhood is today markedly heterogeneous, being visited by a mix of young professionals, many families and some homeless people. At one time, the area had a serious prostitution problem, which was remedied by a controversial rerouting of traffic through much of the residential area. The area is mainly English-speaking but there exists a significant francophone population as well. The Market is located in close proximity to the downtown, to the Rideau Centre shopping mall, to Parliament Hill and to a number of foreign embassies.