As she accepted an award from magazine Foreign Policy for being “diplomat of the year” in Washington, D.C. Wednesday, Canada’s foreign minister Chrystia Freeland was set to deliver a striking rebuke of United States policies under President Donald Trump, and a clear warning that democracy in the world is under threat.

The text of the speech, provided in advance to the National Post, contains the strongest language yet from the Canadian administration criticizing U.S. protectionism and its recent tariffs on steel and aluminum. Freeland calls these “a naked example” of the U.S. violating its own rules. The comments are couched in a broader defence of the “weakening” rules-based international order that’s been in place, through various multilateral institutions, since the Second World War. 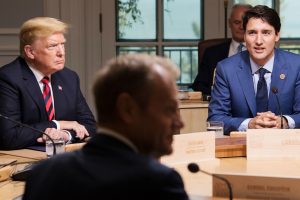 The speech more sharply expresses, and on American soil, what Prime Minister Justin Trudeau said in a press conference after the Group of Seven summit on Saturday — that Canada won’t be “pushed around” by its neighbour. Trump had connected those comments to a decision to pull his support for a joint statement by the G7 countries, shortly after it was published, and to consider new automobile tariffs on imports to the U.S.

The text begins with something of a history lesson about how the “international system of rules” in place today came to be. And a warning that its architects were wrong that the system would cause authoritarian countries to adopt Western political freedoms as they joined it. The idea that democracy could fail may seem “outlandish,” the speech says. “But other great civilizations have risen — and then fallen. It is hubris to think we will inevitably be different.”

When the economic future of people living inside liberal democracies is threatened, the speech says, “that’s when people are vulnerable to the demagogue who scapegoats the outsider, the other — whether it’s immigrants at home or foreign actors.”

The speech invokes American President Abraham Lincoln himself before launching into what seems to be a direct message to Trump: “Facts matter. Truth matters. Competence and honesty, among elected leaders and in our public service, matter.”

In a part of the speech that focuses on the Canada-U.S. relationship, Freeland acknowledges, “we also understand that many Americans today are no longer certain that the rules-based international order — of which you were the principal architect and for which you wrote the biggest cheques — still benefits America.” This is seen “most plainly,” the speech says, in the steel and aluminum tariffs that the U.S. has imposed on Canada on a “national security” basis.

After repeating that the tariffs are “illegal,” “absurd” and “hurtful,” the minister broaches new territory. “They are protectionism, pure and simple. They are not a response to unfair actions by other countries that put American industry at a disadvantage. They are a naked example of the United States putting its thumb on the scale, in violation of the very rules it helped to write.” The European Union and Mexico, which are also facing tariffs, “share our astonishment and our resolve,” the speech continues.

“No one will benefit from this beggar thy neighbour dispute. The price will be paid, in part, by American consumers and by American businesses,” it reads. “The price will also be paid by those who believe that a rules based system is something worth preserving.”

If history tells us one thing, it is that no one nation’s pre-eminence is eternal

The speech ends with a plea to Western nations to make the right choice out of two divergent paths open to them “in a world we no longer dominate.”

One path is to give up on the rules-based order and look for survival in a “ruthless struggle between great powers, governed solely by the narrow, short-term, and mercantilist pursuit of self-interest.” Though Canada would not survive, Freeland’s text reads, the U.S., still the world’s largest economy, “may be tempted.”

“You may feel today that your size allows you to go mano-a-mano with your traditional adversaries and be guaranteed to win. But if history tells us one thing, it is that no one nation’s pre-eminence is eternal,” the speech says.

The other path is to strengthen the existing alliance of liberal democracies in the world, and to reform and renew the rules-based order “that we have built together,” it continues. The speech, before quoting President Ronald Reagan, concludes saying that the values of liberal democracy are under attack from outside and from inside, and that Canada knows where it stands no matter which direction the U.S. decides to pursue.

“Our friends among the world’s democracies — in Europe, in Asia, in Africa, and here in the Americas — are shoulder to shoulder with us. We all know we will be strongest with America in our ranks — and indeed in the lead. But whatever this great country’s choice will turn out to be — let me be clear that Canada knows where it stands. And we will rise to this challenge.”

Original article written by MARIE-DANIELLE SMITH of the Ottawa Citizen.