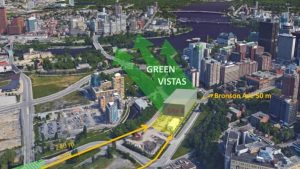 The joint project of the City of Ottawa, Ottawa Public Library and Library and Archives Canada received council’s blessing Wednesday, allowing the city to forge ahead with hiring an architect for the future landmark building at 557 Wellington St. The city-owned property is along Albert Street, west of Bronson Avenue, on LeBreton Flats.

The city will pay $104.2 million and Library and Archives will pay $70.6 million for the building.

The city, whose long-term debt is around $2 billion, will borrow $80 million to help fund its share of the agreement. The finance department estimates the $80-million loan will come with a 4.5 per cent interest rate, repaid over 20 years.

The city will sell the current main library on Metcalfe Street for $20 million to Slate Properties and use the money to help pay for the super library.

Coun. Diane Deans succeeded with a proposal to put aside $2.5 million from the sale of the current library for affordable housing.

The city, in coming up with the financial scheme to pay for the project, wanted to waive a municipal policy that calls for 25 per cent of net sales of city land to be kept for affordable housing. To fulfill the affordable housing requirement, the city says it can use savings from its soon-to-be-defunct vacancy rebate program to backfill that $2.5 million.

The rest of the recommendations on the super library passed unanimously.

The city is in the middle of a competition to hire an architect team.

The super library is scheduled to begin construction in 2021 and open in 2024.

Council signed off on the largest brownfield development discount in the city’s history, giving the Zibi development a $61-million grant to clean up contaminated land off Booth Street.

The massive development along the Ottawa River, a partnership of Windmill Development Group and Dream Unlimited, will get the grant in the form of a break in development charges and property taxes.

The city has a brownfield grant program to spur development on key sites. The program caps discounts at 50 per cent of all eligible costs to remediate the land. The Zibi site is former industrial land once used for pulp and paper operations.

The brownfield grant for Zibi is for 6.5 hectares of land on Chaudière Island and Albert Island.

Three people holding signs opposing the grant heckled council from the gallery after the vote. The opponents think the federal government, not the city, should be responsible for the soil cleanup on the land.

The Ottawa Hospital has the land-use changes it needs to build a new Civic campus on the Central Experimental Farm.

Council approved rezoning 21 hectares of land near Dow’s Lake. A five-hectare chunk of land will also be changed to “general urban area” from “agricultural research area” in the city’s official plan.

The hospital and Public Service and Procurement Canada have finalized a 99-year lease for the land.

The city says the design of the new Civic hospital will be “held to the highest standards” because of its proximity to the Experimental Farm, Dow’s Lake, Rideau Canal and the Dominion Arboretum.

Hospital planners are researching health trends and requirements as they work toward designing the campus.

Domicile Developments is replacing three detached homes at 398, 402 and 406 Roosevelt Ave. with a residential and commercial building. The city’s planning department endorsed a six-storey plan, partly because the property is near the future Dominion LRT station.

The planning committee in a 6-3 vote last month knocked the building down to five storeys.

In an 18-5 vote Wednesday, planning chair Jan Harder won council’s support to stick with the staff-supported application and let the developer have six storeys. A six-storey building is in line with the city’s official plan, Harder said.

Original article written by Jon Willing of the Ottawa Citizen.