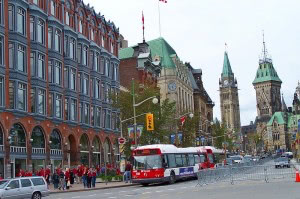 Centretown is the heart of the City of Ottawa. It is a thriving mix of national and local government buildings, a business district north of Laurier, shopping and nightlife areas along Elgin and Bank (including The Village), and beautiful heritage detached homes, apartment buildings and modern condo developments.

Centretown is defined as the area bounded on the north by Gloucester Street and Lisgar Street, on the east by the Rideau Canal, on the south by the Queensway and on the west by Bronson Avenue. Traditionally it was all of Ottawa west of the Rideau Canal, while Lower Town was everything to the east. However, in many cases, such as with the census, real estate listings, the Centretown Citizens Community Association, and with people in general, the Golden Triangle and/or Downtown Ottawa (between Gloucester/Lisgar and the Ottawa River) are also considered part of Centretown.

Centretown is marked by a mix of residential and commercial properties. The main streets such as Bank Street and Elgin Street are largely commercial, while the smaller ones, notably MacLaren and Gladstone are more residential. Much of the area still consists of original single family homes, but there are newer infill and town house developments and low-rise and high-rise apartment buildings. A construction boom that began in the late nineties significantly increased the number of condominiums and other residential and commercial high-rise buildings north of Cooper Street.

Where to Go on a First Date