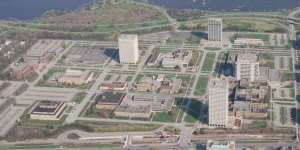 Tunney’s Pasture is a 49-hectare (121-acre) area within the City of Ottawa that is exclusively developed for Canadian federal government buildings. It is bordered by Scott Street to the south, Parkdale Avenue to the east, the Sir John A. Macdonald Parkway to the north, and Northwestern Avenue to the west. While strictly speaking it is confined to this area, people living in the vicinity of it will often call the wider neighbourhood Tunney’s Pasture. The complex, home to some 10,000 employees, is served by Tunney’s Pasture Station on the transitway.

Before development in the early 1950s, this area was officially known as Lot 35, Concession A, Township of Nepean, and, as the name still indicates, it was used as a farmer’s pasture and named after Anthony Tunney who pastured his cows on the empty land.

As a young man, Anthony Tunney emigrated from Ireland to Ottawa in 1867 and married and built a house at 201 Parkdale Avenue. The owner of the pasture, the Ottawa Lumber Merchants’ Association, hired Tunney to be the caretaker of the land and allowed him to graze his cattle in the field. Although Tunney was able to claim ownership because he had been paying the taxes on the property, he never did so and the land was eventually sold by the association to the government.

In 1950, the property became part of the Gréber Plan that envisioned it as a government employment centre within a quiet and secure park-like campus. From the 1950s to the 1960s, 18 low-rise buildings were constructed with modern, classical-inspired architecture and similar materials, massing, and scale. Most of these combined research and office functionality under one roof. Starting in the 1970s however, new buildings and additions were built that deviatated from Gréber’s vision, introducing high-rise office towers, new architectural styles, and cladding materials to the site.

Little development took place in the 1990s, 2000s, and 2010s. By 2011, most buildings were considered outdated and the site under-used. So Public Works and Government Services Canada has initiated a plan to redevelop the campus with new high-rise buildings and mixed-use commercial and residential space over a 25 year period. In all, the plan aims to double the number of federal employees to 20,000 and add between 800 to 1000 residential units.

Champlain Park (also known as Old Ottawa West) is an older urban neighbourhood in Kitchissippi Ward. It was considered in the 1930s as the west end of town. The boundaries of the neighbourhood are the Ottawa River (to the north) and Scott Street (to the south). To the east is Tunney’s Pasture and to the west is Island Park Drive. Westboro Beach is also to the west. Most of the homes were built in the 1920s and 1930s.