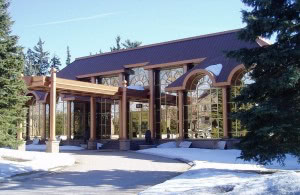 Rockcliffe Park is a neighbourhood in Rideau-Rockcliffe Ward in the east-end of Ottawa. It is the wealthiest neighbourhood in the city and is one of the most prosperous enclaves in Canada. From 1926 until 2001 it was an independent village, but was amalgamated with the rest of the city January 1, 2001.

As it was long a separate village not under the jurisdiction of Ottawa’s municipal government, Rockcliffe Park differs from the rest of the city. It has very few sidewalks, and is also relatively inaccessible to through traffic. Much of Rockcliffe is still wooded, and the houses are set far apart on wide lots.

The area is northeast of downtown, on the southern banks of the Ottawa River. It encompasses the small McKay Lake (a Meromictic lake), Sand Pits Lake, and the Rockeries, a rock garden and playing field maintained by the National Capital Commission (NCC). The largely francophone neighbourhood Vanier area lies to the south.

On the cliffs of the Ottawa River is a public greenspace called Rockcliffe Park. It is transversed by a branch of the Rockcliffe Parkway. The parkway has several small parking lotsalong its length that enable visitors to enjoy the lawns, wooded areas, parks, and lookouts. It also contains a large gazebo and public restrooms which are maintained by the NCC.

Rockcliffe Park is home to many Ottawa notables. Stornoway, the residence of the leader of the Canadian Official Opposition is located there. Many ambassadors to Canada also live in Rockcliffe, including the ambassadors of Argentina, Barbados, China, Colombia, Denmark, Indonesia, Iran, Israel, Japan, Malaysia, the Netherlands, New Zealand, Norway,Pakistan, South Korea, Sweden, the United States, and Venezuela. The neighbourhood attracts many of Ottawa’s corporate leaders, notably Michael Cowpland, former CEO of Corel Corporation, who owns a large, gold coloured residence in a contemporary neo-classic design.

Also located in Rockcliffe is a community hall/library complex. The library was originally funded, built and staffed through the efforts of Rockcliffe residents, but it is now a branch of the Ottawa Public Library, with computer access, a children’s area, and a young adult section. The library houses a special collection of art-related books called the Margaret A. Bailey collection. The elementary is located beside the library and community hall.

The sale of the Canadian Forces Base CFB Rockcliffe, has brought forth plans by local developers to make an entirely new neighbourhood on these grounds, with stores and houses, as an example of a community built on “sustainable” principles.