Ottawa gearheads may have come out with all different kinds of cars and motorcycles to the Canadian Capital Classic Car Show, but all came to show off their unique rides and celebrate the hobby.

Graham Linttell drove his 1934 Lagonda 1680 to the show, which he said is very rare and highly sought after. Only 260 of them were ever made and Linttell said he bought his in Arizona.

“If it’s a nice day I’ll drive it…  it’s got dings and scratches on it, it is what it is and if it happens to get another ding, it doesn’t matter to me,” he said.

Even though it’s very rare and old, Linttell said he drives and works on it often.

“There’s always work to do on these cars,” he said. “You drive them for three or four days then you work on them for two, that’s the fun of it.”

This year was the first edition of the classic car show and was held at Wesley Clover Parks on Sunday.  Organizers said there were hundreds of different cars on display.

Husband and wife Marc Renaud  and Gisele Renaud showed off their two vintage Volkswagens, one a red 1967 Volkswagen bus and the other a yellow 1972 Volkswagen Beetle. Marc said he and Gisele are “Volkswagen fanatics” and completely rebuilt the two cars from scratch. 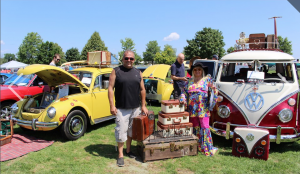 “They were out of commission when we first got them, they were pretty well rusted out, it took us a long time, but because we don’t have any children, we’re able to find all the time to restore these vehicles.”

He said they go to a car show almost every night in the summer with their two cars. Gisele drives the Beetle and Marc drives the bus. He said the best part about rebuilding the cars has been the smiles on people’s faces when they see them and the memories they bring back of the 1960s and 1970s.

“There’s a lot of people taking pictures because it brings them back to those years and everybody has a beautiful smile on their faces… that is what we thrive off of, is everyone having beautiful smiles.”

Not all cars on display were vintage. James Richard brought his highly-modified 2006 Dodge Magnum to the show. He said the station wagon – muscle car lets him stand out from the crowd.

Richard said he modified the car so it accelerates much faster than it would otherwise and installed an engine cover that adds red details under the hood.

“I want my daily drive to be an enjoyable drive,” he said.

One of the oldest cars at the show was a 1922 Ford Model T, which Arnold Saunders said he spent five years restoring. During an ice storm in 1998 the roof of the car was destroyed, so Saunders said he rebuilt it so it could be automatically lowered with the flip of a switch.

He said the time and money he spent on it is justified by the number of people who came to look at the almost 100-year-old car.

“I enjoy working for something like this, it’s a hobby. I don’t golf, I don’t trip around the world, I don’t have a yacht but I enjoy doing it.”