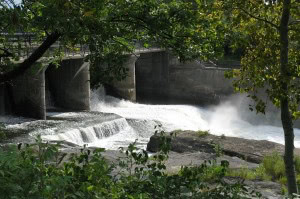 Mooney’s Bay is an artificial bay on the Rideau River. The Bay was created during the construction of the Rideau Canal when a dam was built, creating Hog’s Back Falls, with canal locks for boats to bypass the falls. This created a widened area of the River, suitable for boating.

Mooney’s Bay Park is a public park on the Rideau River. Its main entrance is on Riverside Drive, opposite Ridgewood Avenue, but can also be accessed from Hog’s Back Road. It has a beach, picnic areas, a children’s playground and is the site of the Terry Fox Stadium. Located at 2960 Riverside Drive, year-round activities are available such as swimming in the waters of the Rideau River, biking along paths that can take riders as far as the downtown core, and cross country skiing. A ski school is available, as are indoor change rooms.

Mooney’s Bay is the site of the annual HOPE Beach Volleyball tournament and the annual Ottawa Dragon Boat Race Festival.

Mooney’s Bay Park has been adopted by the Omicron-Pi Chapter of the Kappa Sigma Fraternity.