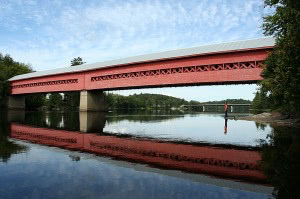 Across the border to Quebec, every Ottawan should visit Wakefield at least once. With posh boutique stores, noteworthy restaurants, beautiful scenery and a rich history, Wakefield has something for everyone. Four must-see attractions here include the Black Sheep Inn (Auberge Mouton noir), the Wakefield Mill Inn and Spa, the beautiful wooden covered bridge and the famous steam train that travels through the area. A meal at the Café Pot-au-feu is recommended, as the train travels by it at scheduled intervals. Travel at different times of the year for different views of Gatineau River and Park… it’s especially beautiful in the fall.

Merrickville is known as the Jewel of the Rideau, and it’s clear to see why. The town’s main claim to fame are the three locks along the Ottawa Canal that have a total lift of 25-feet. Nearby is the old Blockhouse, which was built by Col. By to protect against American invaders after the War of 1812, but has now been converted to a historical museum. The area is also well known for its large artist community, the Rideau Woodland Ramble (a large garden path) and the many shops and eateries in the main part of town.

Near Morrisburg, a small village noteworthy as the site for the Battle of Crysler’s Farm in 1813, Upper Canada Village is a collection of 19th century buildings, that had to be moved during the flooding expedition of the St. Laurence Seaway Project in the late 1950s. The Village operates as a heritage park where visitors can learn about daily life in the year 1866. Park staff, in period costume, perform work necessary to the village at the time, such as blacksmithing, operating a mill, weaving, farming, running a bakery and a cheese shop, and more. The park is both educational and entertaining and is fun for people of all ages to discover.

Gananoque is known as the “Gateway to the Thousand Islands,” which are nearby in the St. Lawrence River. Main attractions include boat cruises to the stunningly beautiful Thousand Islands (there are actually 1,864 of them) and Boldt Castle in New York, built as monument of love by the wealthy George Boldt for his wife. Sadly, she died before the structure could be completed, and it lay abandoned and incomplete for over 70 years before it became a major tourist site for the area. Also noteworthy is the Thousand Islands Playhouse which operates two theatre spaces, the Springer Theatre and the Firehall Theatre.

Gatineau Park and nearby Chelsea are an absolute must for Ottawa dwellers to visit, and many travel here several times a year, for its breathtaking scenery, nature and biking trails, swimming in Meech Lake, bird-watching, enjoying the fall colours in autumn or skiing in winter at Camp Fortune, which also offers ziplining and treetop obstacles in the summer months. Le Nordik Spa is a well-known spa retreat located directly east of Gatineau Park and is well worth a visit. Nearby Chelsea offers travelers a fun day of shopping and eating amongst its beautiful heritage buildings. Also, you simply must visit Kingsmere, with the magnificent Mackenzie King Estate, featuring ruins, gardens and awe-inspiring views including a waterfall.

Ottawa housing market steps it up a notch in June