The first edition of the Ottawa kite festival attracted veterans and amateurs alike to Andrew Haydon Park on Saturday.

Most people at the festival flew small, colourful kites, but for Steve Pallen it was a chance to fly his fleet of stunt kites. They are more delicate and sleek than toy kites and take two hands to control in the air.

Pallen is able to do tricks with his kite, like dives and flips, as well as making it stand on its tip on the ground. He said seeing other people flying stunt kites in Seattle made him first want to take up the hobby.

“I went to the Washington State kite festival and I saw a guy flying a kite doing all these really neat tricks, he would come screaming down to the ground,” Pallen said. “I saw it and I thought ‘I gotta be able to do that’ and so I bought my first stunt kite there and that was it.” 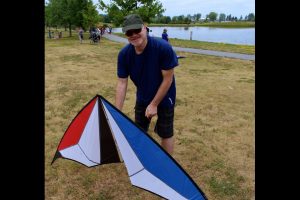 Pallen brought around 20 kites with him to the Ottawa festival – all with different uses — including some he made himself. The ones he bought range from around $150 to $500 USD. In the mid 1990s he said he would spend 16-20 hours per week flying.

“It’s relaxing, it’s also challenging. Learning the tricks, becoming good at them is probably the biggest draw,” he said.

The first trick he learned took months to master and is called an axel, which he said is a gateway to other more complicated tricks. An axel is when a kite does a counter-clockwise roll in a midair.

“That was hard so I spent months yanking the kite out of the air before I learned that trick,” he said. 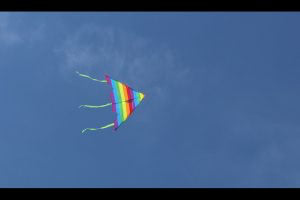 While the kiting community is larger on the west coast of the United States, Pallen said it’s non-existent in Ottawa. The kite flying festival on Saturday was the first organized event he has been to in the city and the first time he had flown for around five years. He said he hopes similar events will help nurture a community in Ottawa.

“When I first saw the stunt kites… I just knew it would be challenging, fun and it was just something I had to learn.”

The event was a fundraiser for a charity called Sukara, said Mazib Rahman, one of the organizers. The group wanted to try something unique and host a festival that hadn’t been done before in Ottawa. Other cities in Ontario have annual kite festivals, such as Thunder Bay, which just held its 38th event in June.

Russell Peters getting 'Deported' to Ottawa